Perfumes I Wore On My Vacation 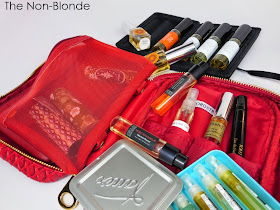 By the time you see this post I'll already be back home after almost two weeks away. I've shown you what I stuffed into my travel baggie (which included one perfume), but here's the pouch that I'm filling with perfume: travel sprays, decants and samples to suit every mood and occasion (and probably enough for seven people). I wish I could tell you there was a lot of deliberation and intention behind this selection, but I was too preoccupied to plan and decant a bunch of stuff . So instead I just grabbed several much-loved perfumes that I had in an appropriate size and called it a day, hoping I don't get a craving for Ferme tes Yeux along the way. This bag is obviously going in my checked luggage, carefully wrapped. Here's what I'm taking:

Frederic Malle- Musc Ravageur and Le Parfum de Therese. This is kind of a tradition, actually. I'm going to see my father while away and he likes smelling Musc Ravageur. And Therese has already seen the world with me, so she needs to go to Italy.
La Via Del Profumu- Tawaf. I will be jasmined.
Ormonde Jayne- Tolu. Just because.
A small case of Tauer samples.
Sage Machado Onyx and Sage.
Aroma M Geisha Noir (saved me from decanting Shalimar. It hits a similar spot).
A bunch of Histoires de Parfums minis.
Neela Vermeire- Trayee and Bombay Bling. I could have also added Mohur, but decided to stop there and then.

What perfumes did you pack for your last vacation? Did you go overboard?
Gaia at 8:46 PM
Share